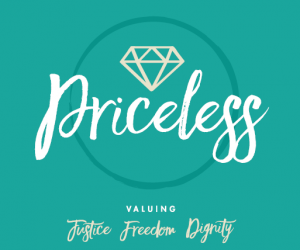 Priceless benefits the Global Center for Women & Justice to efficiently and effectively execute our mission to end human trafficking.

The Global Center for Women and Justice (GCWJ) at Vanguard University recognizes the need for a highly diverse and collaborative environment to combat human trafficking and advance the global status of women and vulnerable populations. For sixteen years, GCWJ has provided training and resources to enable leaders to promote justice against human trafficking and modern-day slavery through education, research, advocacy, and collaboration. GCWJ carries out this mission by working with students, educators, law enforcement, healthcare professionals, and community leaders to end human trafficking and the cyber-exploitation of women and children. We provide the resources and education for the next generation to continue the fight against human trafficking and for gender equality.  It fills me with pride that many of our graduates are now advocates and leaders in this area, leading non-profits, working directly with vulnerable populations, and training others to combat modern-day slavery.

Your generosity fuels the Global Center’s mission of fighting human trafficking in Orange County and around the world.

Grateful for your partnership,

Nicole Suydam, who served nearly a decade as Goodwill of OC’s vice president of Development, returned to Goodwill of Orange County as president and CEO in 2018. She has more than 20 years of management and leadership experience working with local and national nonprofits dedicated to meeting human service needs.

Prior to returning to Goodwill, Suydam served as CEO of Second Harvest Food Bank of Orange County where she oversaw the distribution of more than 25 million meals to Orange County families and guided a vast network of more than 200 community partners.

In 2019, she was recognized as one of only six “2019 Women of Coast” by Coast Magazine for her unwavering commitment to Orange County and advocacy work on behalf of all its citizens. Suydam was also named the “2018 Women of the Year Award” by the Orange County Business Journal, and in both 2017 and 2018 was named one of the “Top 100 Most Influential” by the Orange County Register.

Suydam graduated from Vanguard University in Costa Mesa, is past president of its Alumni Association Board and today serves as a member of the university’s Board of Trustees. She also currently serves on the Board of Directors of the Orange County Business Council.

Ready to join us?

Just fill out your details below and then be sure to check your inbox for a special thank you gift.